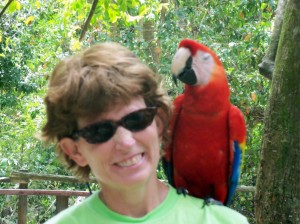 Went to Gumbalima Park on Monday!

Monday was my off day, so I went to Gumbalimba Park (it’s located between West End and West Bay. Joe said I was ready to hit the wild world of transportation after proving myself last week making it to Coxen Hole everyday for the medical/dental clinic. So, after getting the key information about how much to pay for cab (they rip off Americans because they think we are rich), off I went, all by myself.

To catch a cab, I have to walk down to the main road and flagged them down. As expected, he tried to charge me 70 lps, but I managed to get him to 50lps (about $2.50 American)with the help of another passenger in cab. That’s another thing-you don’t get a private cab ride-he picks up people along the way, so you could end up with a car load. Anyway, I was feeling pretty good after getting and negotiating  cab, when I heard this load noise from under the car-it was like something broke off! The driver pulled over, got out and said it was the brakes ( the passenger was translating). I’m thinking great-I’m out here in hilly “nowhere land”  and he has NO BRAKES! Of course, I had already prayed (I pray all the time-seriously), but it was SUPER PRAYER TIME! Long story-short-apparently, it wasn’t his brakes, because we made it to the park!