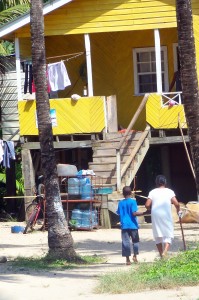 In my last post, I described my “hitting the wall” period here in missionary land. I was discouraged, but not defeated. I clearly know I am in God’s will for my life. I have never prayed as much as I have since landing on the ground 28 days ago. Well, God showed me a taste of heaven -when things happen that only God can orchedtrate. Long story -Gregory is a 13 year old boy born with a physical disability. He kinda hobbles around instead of walking normal. Well, an American family that has been coming to Roatan, developed a love for this boy and would like to take him to U.S. for surgery and adoption. Joe and project Honduras has been doing all the paper work with the embassy (it’s a major ordeal to get an american visa and passport).

Gregory, his mother and aunt (Jena Lee)have to travel all the way to the capital in Tegucigalpa, Honduras to meet with embassy officials next Tuesday. Out of my prayer time and discernment, I asked Joe if I could go with them. I was hesitant to ask, for fear that I would be intruding or would be more of a complication for Jena Lee. For you see, Jena Lee (her house in pic above) has been raising Gregory. His Mom (drug issues) is going to relunguish her parental rights to Jena Lee (her sister), who will relinquish her rights, so the American family can adopt Gregory after he gets to U.S.

Honduras is very strict about allowing people, especially children to get  a visa. The only way to get a visa- if it’s for a medical/surgical reason. Anyway, Joe said he would ask Jena Lee if I could tag along. Now, this would mean travelling with them the way they travel, taking a ferry to La Ceiba (mainland) on Monday, then a 9 hour bus ride to Tegucigalpa, staying in a hotel, then going to embassy via cab, sitting in embassy waiting for appt and then travelling 9 hours back to La Ceiba, get on ferry and get back to Roatan sometime on Tues. We may have to stay Tuesday night in Tegucigalpa , it depends on how long we have to wait.

Now, here’s the God part! When I saw Jena Lee late Monday afternoon, she had the biggest smile! She was so excited that I was going with them. Here’s the moment-Jena Lee says” this was an answer to prayer. God has answered my prayers by sending you.” Wow, that certainly was not expected. Apparently, Jena Lee is concerned about her sister’s behavior and attitude. This is a no money involved transaction-she is afraid the mother may try to get money for giving up her parental rights. Also, Jena  Lee said she would feel better dealing with the embassy if I was with them. I will fill you in on all that later-it’s complicated. The point of it all,  God was at work (he is always at work)and that thrilled my soul.

So, it’s all set-I will go next Monday with them to Tegucigalpa (never been there) and be a part of this life changing event for Gregory. Now, it’s possible, they could turn him down again for a visa (this is the second attempt). It will cost me about $150 to make the trip-but what a priceless experience!

2 thoughts on “A God Moment-Right When I Needed It!”